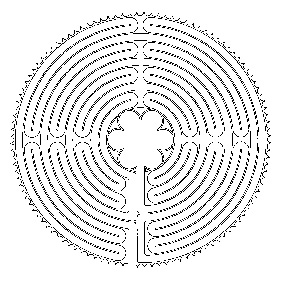 The creation of the labyrinth garden was a community effort made possible by many generous contributors. This project was conceived and brought to fruition by Victoria Stone of StoneCircle through the Institute for Health and Healing.

San Francisco Chronicle, June 6, 1997: "...The center is the first U.S. hospital to install one as part of its healing mission. The path is patterned after a labyrinth laid in France 800 year ago. ... The path, which takes the walker in and out over four quadrants until the center is reached, covers nearly one-third of a mile. ... It can be a spiritual and healing journey, advocates of the design say, one that quiets the mind and brings inner peace."