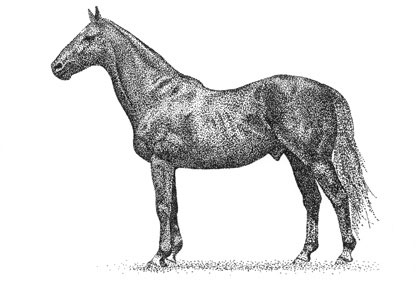 Man o' War (March 29, 1917, Nursery Stud farm, Lexington, Kentucky—November 1, 1947, Faraway Farm) is considered one of the greatest Thoroughbred racehorses of all time. During his career, following World War I, he won 20 of 21 races and $249,465 in purses. Sired by the prominent Fair Play, his dam, Mahubah, was by the U.K. Triple Crown Champion, Rock Sand.

Man o' War was owned and bred by August Belmont, Jr. (1851–1924), whose father's accomplishments were recognized through the naming of the Belmont Stakes. Belmont, Jr. joined the U.S. Army at age 65 to serve in France during World War I. While he was overseas, his wife named a new foal "Man o' War" in honor of her husband.

This ink stipple scene is part of my Equine Series.