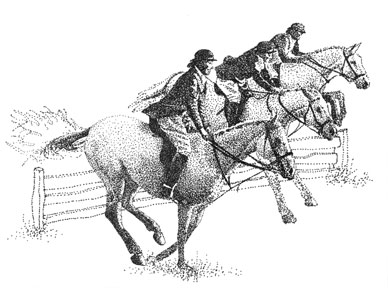 The steeplechase, a form of horse racing, earned its name from early races in which orientation of the course was by reference to a church steeple. Horses would jump fences, ditches and whatever intervening obstacles they encountered in the countryside. The term "steeplechase" is now used to refer to a distance horse race with a diversity of fence and ditch obstacles. The most famous is the Grand National, which is held each year at Aintree Racecourse in Liverpool.

This ink stipple scene is part of my Equine Series.