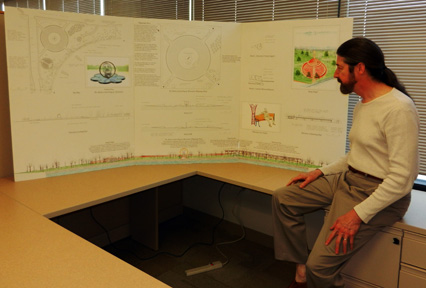 In 1968, I was a young man living in New York City and working for the New York Public Library’s Harlem research branch, Schomburg Collection of Negro History and Literature. April 4th changed everything.

Dr. Martin Luther King Jr. was assassinated! Harlem erupted in anger. I emerged from the subway at 135th & Lennox to a Harlem on fire, with looting in plain sight and covens of uneasy cops on each corner … but that’s another story.

On August 28, 2011, the Martin Luther King Jr. Memorial was officially dedicated in Washington, DC, after a decades-long process that began in 1999 with an international competition for its design. The winner of the competition was ROMA Design Group in San Francisco.

There were 877 worldwide entries in this competition, and I was one of them. The specs were the same for each entrant: three foam-core boards showing plans, elevations, and details of your proposed memorial, along with text describing intent.

On this website, I've shared my entries for the King competition:

The 3.4-acre site, centered between the Lincoln and Jefferson monuments, was challenging. I began by reading about Dr. King’s life and work, and then applied that information, along with my own experiences and feelings, to my memorial design.

Ultimately, I designed a human-scale memorial that made the man ... well, a man ... one whom you could hug and yet admire. I designed spaces for leisure and reflection—a place to enjoy time after time, coming away with fullness and refreshing peace.

Other related projects include a Chartres Cathedral-inspired labyrinth for the California–Pacific Medical Center in San Francisco and a full-size travelling labyrinth for the Episcopal Church of San Mateo County. These projects were the inspiration for my Martin Luther King Jr. Memorial centerpiece.